The solar-centric model we were taught in school – one in which all planets revolve around the sun – is incomplete, to say the least. We now know that the entire solar system is moving fast through space, so the path of our planet does not constitute an ellipsis – it is a spiral. Furthermore, the solar system is not traveling in a straight line! We are winding around an arm of the Milky Way, moving away from the center of the galaxy.

When you visualize all of the embedded stellar rotations – the Earth spinning about its axis, spinning around the sun, winding around an arm of the galaxy – it becomes clear that the natural path of our stellar movement is a Nested Helix – a fractal spiral, by definition comprised of smaller spirals. It is therefore appropriate to model time in a way that represents this natural path. Of course, there are also artificial and semi-artificial cycles, such as “month” and “hour,” and these can be included in the Nested Helix as well. Moreover, any calendar – from Mayan to Gregorian – may be modeled with a Nested Helix because of the model’s inherent simplicity and versatility.

The model is simple, because the cycles of every order – year, month, day, hour – are represented in the same fashion. The versatility of the model lies in its fractal nature – an unlimited number of orders may be represented in a single view. This allows the user to clearly visualize the relationship between specific points (events) or segments of time mapped on the model, regardless of scale. The model can also support non-uniform cycles, where the size of cycles increases or decreases linearly, progressively, or in stages, such as the case of the Mayan calendar.
The model presented here is only a proof of concept, which is the reason why it has several limitations, such as coarse transitions, only 2 labeled orders, and the lack of ability to map events or time segments. It is sufficient, however, to see the potential benefits of this approach to modeling and visualizing time. 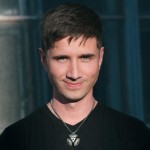